Rejoice with those who rejoice:  MomsHOOpray and University of Praying Moms rejoice with those families experiencing the excitement and celebration of upcoming college graduations, or the anticipation of launching a college freshman in the fall!  Many prayers have preceded these young men and women, and many of these students have fed and grown their faith and will continue to flourish. Let’s rejoice and give thanks!

Weep with those who weep: But other college graduates or incoming freshman have walked (or will walk) away from God.  Some are fence sitters, desert wanderers or defiant prodigals. Let’s weep for them and those who suffer the pain of watching and waiting for a prodigal to return. Let’s pray for prodigals this summer.  And pray for incoming freshman to experience God’s provision and protection as witnessed in this testimony.

2. Read an extremely insightful article, 5 Prayers for Prodigals, reposted below from a favorite trusted resource, Family Life. (if you wish to view the original posting, click the title.)

3. Finally, if you are in a season of pain, listen to In The Waiting, by Greg Long.  You are not alone.  We weep with you.  (Click here if listening via email.)

Even when we see no visible evidence, we can trust that God is at work.
By Phil Waldrep

“Phil, I’ve prayed for my son every day for his entire life, for 53 years now. I enjoyed praying for him while he was in school. When he joined the Navy and got involved in drinking, I prayed even harder. During the last 25 years, I’ve prayed over and over again for God to change his heart, but nothing has happened. I still pray, Phil, but now they’re just words. I’ve stopped expecting an answer.”

Many family members can identify with this mother. She is a devout Christian who loves God with all her heart. She, however, cannot understand why God does not answer her prayers. She praised God when her son told her he stopped drinking. Then he started again. She thanked the Father for His mercy when her son came back to church. Then he quit.

Family members of prodigals sometimes feel this frustration. They prayed for years. They believed in God. Now their faith has wavered. They no longer believe God is going to work in their prodigals’ hearts.

I want to encourage you to be honest about your struggles with unbelief. Words of encouragement: You cannot give up. Keep trusting our merciful Lord to accomplish His purposes.

Let me offer some specific prayers to help you pray.

Prayer #1: Lord, use my prodigal’s friends.

In my conversations with prodigals who returned to the Lord, I asked, “Who had the greatest influence to convince you to turn back to Christ?” To my surprise, it was not their parents or siblings. The primary positive influence on prodigals was their friends who cared enough to speak the truth and took them to church.

A prodigal expects his parents to push him toward God. He, however, often disregards them as an influence. On the other hand, a coworker, a friend, a neighbor, or someone who is a member of the same club can often find a prodigal’s listening ear, which has been closed to parents.

My encouragement, then, is for parents to pray, Lord, would You bring a godly friend into my prodigal’s life to share the message of hope and model a life of trust in You? Bring somebody who will love my prodigal with Your love and melt his heart with Your grace.

David and the other psalmists expressed their hearts openly to God. They did not sugarcoat how they felt. They were painfully honest and direct in addressing God. Many of the psalms express deep disappointment and heartache.

How long, O Lord? Will You forget me forever?
How long will you hide Your face from me?

Prayer #3: Lord, I ask for brokenness.

It is a dictum of Alcoholics Anonymous that a person has to “hit rock bottom” in order to change. We are prideful people. We do not want to admit our needs. We try to compensate for our shortcomings any way we can. Your prodigal is no different. She will cling to any hope of fooling herself, her friends, and her family as long as she can.

Most prodigals do not look for help until they become very needy. In fact, as I watch people in trouble, the only factor that determines whether someone gets help is utter desperation. When people become desperate, they will cling to anything that promises the hope of change. Before they reach that point, however, they use all kinds of excuses and mind games to convince themselves that they are doing fine.

Jack has a sister who is an alcoholic. He started sharing Christ with her while she was in high school. She never listened. She made fun of him to her friends, but nothing could stop him from loving her.

They are now in their 40s. He still prays for her every day. He asks God to touch her heart, break through the hard shell of her pride, and draw her to himself. He prays for her brokenness.

Through four failed marriages, two miscarriages, a bout with cancer, and a near-fatal car accident, she remains unbroken. In each case people told her, “Wow! You are so unlucky!” Look at all the bad things that have happened to you.” My friend believes God is answering his prayers. Each calamity has brought an opportunity for her to “come to her senses” and repent. Each heartache is God’s megaphone to get her attention. So far, she is not responding.

“I don’t know what it’s going to take for God to get through to her,” Jack told me sadly. “But there’s one thing I’m sure of: God is sure doing His job of giving her chances to repent. I couldn’t ask Him to be any clearer in showing her the desperate need in her life. Maybe someday she’ll listen.”

Make no mistake: You and I are in a spiritual battle all day every day. The forces of evil are strong. They are nothing compared to the incredible power of God. Our prodigals may be in the grip of evil, but God is far stronger.

We Christians tend to make one of two mistakes when thinking about the devil. We either do not think about him enough or we think he has more power than he actually does. We know he is a thief who comes “to steal, and to kill, and to destroy” (John 10:10). He delights in deceiving our prodigals about the goodness of God. He delights in deceiving us about God’s gracious intentions. He knows that if he gets us to question God’s character, he gains a foothold to exploit.

We resist him with truth and grace, with the Word of God, and with the power of love. In Ephesians 1:20-23, Paul reminds us:

(God) raised (Jesus) from the dead and seated Him at His right hand in the heavenly places, far above all principality and power and might and dominion, and every name that is named, not only in this age but also in that which is to come.

And He put all things under His feet, and gave Him to be head over all things to the church, which is His body, the fullness of Him who fills all in all.

Jesus is not “barely” above the forces of darkness. He is “far” above them. He is infinitely more powerful. He gives us tremendous resources for the battle we fight. Later in the same letter, Paul instructs us to fight and to use all the armor available to us (Ephesians 6:10-20). Soldiers in battle expect to get dirty. Wounds are expected. If a soldier’s resources are good and their commander is a great leader, however, they are confident of victory.

When you pray hard for changes yet nothing happens, you are in good company. The prophet Daniel once prayed for three weeks for God’s help. Finally, the angel Michael appeared. He explained that God had heard his prayer the first time he uttered it, but an adversary blocked the path of the help God had sent.

God hears every prayer, but Satan remains active in attempting to block God’s good work. Prayer is essential for your victory. It is vital for the successful return of your prodigal. Ask God to give you a fresh perspective on spiritual conflict so you can fight effectively for your prodigal.

Some of us want to just give up. We have had it. We tried being nice. We tried being tough. We listened to the advice of friends. We prayed a million times for our prodigals to change. Still, nothing changes.

The fruit of the Spirit includes the quality of “longsuffering.” Tenacity is one of the primary virtues in the Christian life. The Bible urges us to “run with endurance the race that is set before us” (Hebrews 12:1).

People who run marathons tell me that at various times in the race, they want to quit. Their legs feel like lead. Their stomachs ache. Their vision gets blurry. They even become nauseated. They feel like they cannot take another step, but they take that one … and the next.

The Christian life is similar. It’s a marathon, not a sprint. Jesus is our supreme example of tenacity. Scripture encourages us to keep “looking unto Jesus, the author and finisher of our faith, who for the joy set before Him endured the cross, despising the shame” (Heb. 12:2). Jesus could endure the worst that life offered because He knew what would come later: resurrection and reunion with the Father. As we follow His example, we need tenacity to keep going, to keep believing that God is good and that He is sovereign. Even when we see no visible evidence, we can trust His Word that He is at work.

Taken from Reaching Your Prodigal, copyright © 2016 Phil Waldrep. Used with permission by Worthy Books, a division of Worthy Media, Inc. All rights reserved.

1. A crisis with a child means your family is headed into a period of testing … and of growth. Read “Loving the Prodigal Child.”

2. Listen as Phil Waldrep, president of Phil Waldrep Ministries, answers three questions that parents of prodigals often have: “What did I do wrong?” “What are the motives of prodigals?” and “What practical steps can I take when dealing with my prodigal?”

3. If you are parenting a prodigal, or know someone who is, order Reaching Your Prodigal, by Phil Waldrep. 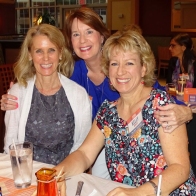 Judy and Kathy celebrate with new “grad” mom, Class of 2019

The University of Praying Moms 2018

What NOT to wear for UVA 2017 Family Weekend

2017 Nordstroms Dinner where we welcome lots of moms who never make our in-person prayer times.

Taking cover from the tornado

Kick off Lunch with U’moms

What a beautiful group of praying moms!

25 momsHOO, both old and new, took over the mid section of Nordstroms’ Cafe to celebrate the faithfulness of the Lord and the friendships that have been formed.

Looking good in her new “hoo-doo”

HOO is the lucky winner of our website contest?